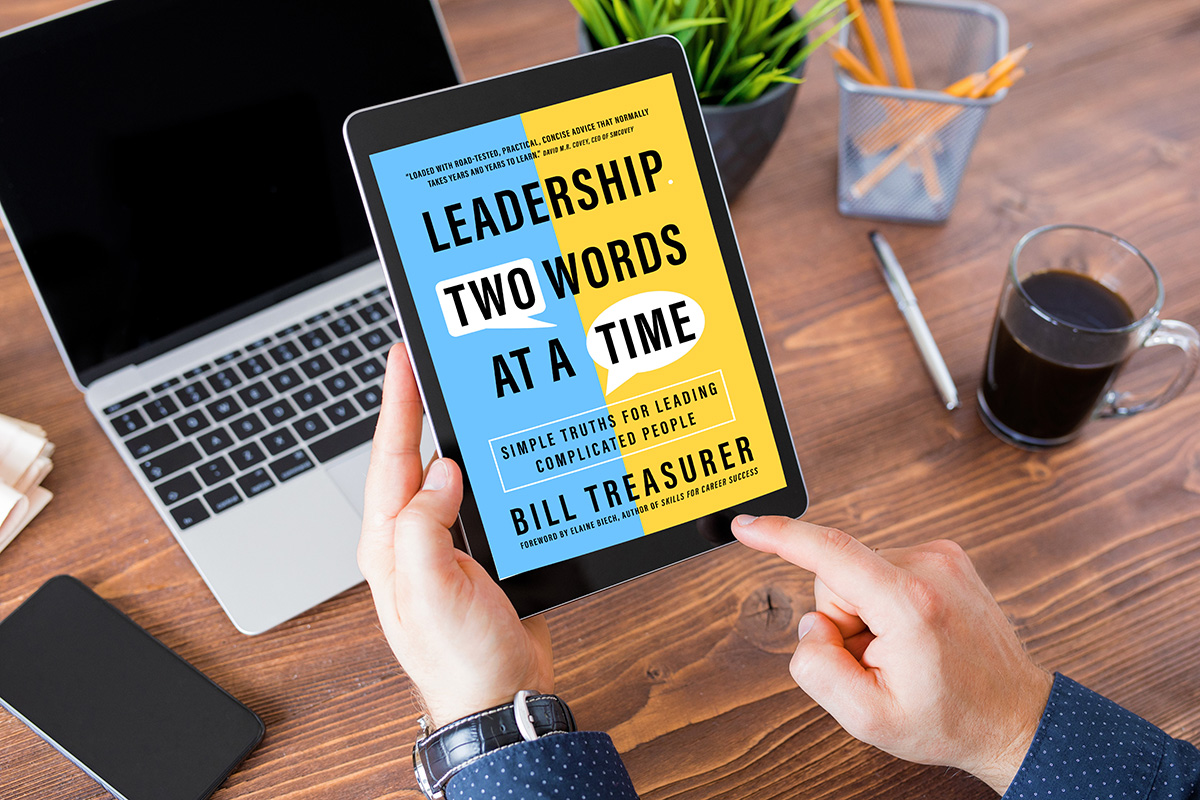 Over the course of twenty-five years, across thousands of hours, I have coached hundreds of leaders from all ranks. Over time, I noticed that leaders were far more likely to benefit from a coaching conversation, to act on commitments made during those conversations, when they were left with brief, memorable headers about the insights that we discussed. Often the insights were captured in two simple words. Two words. Following a coaching session, for example, one leader started mentally reciting the words “calm confidence.” He used these two words when preparing to attend meetings with executives whom he found intimidating.

Another somewhat negative leader benefitted by continually reminding herself to “practice gratitude.”

Another learned to control his urge to always chime in by simply remembering to “talk less” to be a better listener.

Many leaders who struggled to set boundaries benefited from the words “personal fidelity.”

Simple two-word phrases often had a neutralizing effect on situations that leaders formerly found charged, intimidating, or baffling. Hard situations were made easier to face just by simplifying how they were described. “In the fewest words possible,” I started to ask my coachees, “sum up the solution to the challenging situation we just discussed.” The fewer words they used, the clearer the coachees got and the more bearable their situations became.

Leadership Two Words at a Time

Ten years ago, I started stockpiling some of the two-word concepts that my coaching conversations centered around. A pattern developed. Many of the two-word headers described important ideas that most leaders struggle with or need to know. As time went on, I would add to the list. As the list of two-word essentials grew, I recognized that they could prove especially useful to new leaders. There is a huge amount to learn as you transition into a new leadership role. But these lessons can be more manageable, understandable, and actionable when carved up into two-word leadership essentials.

Leadership as a practice will always be hard—but it doesn’t have to be hard to understand. In fact, the basic building blocks of being a good leader are surprisingly easy to understand once succinctly explained. Years of coaching taught me that many essential leadership lessons and important truths can be summed up in two words.

Leadership as a practice will always be hard—but it doesn’t have to be hard to understand.

The concepts themselves may be robust and full, but they can be grasped and comprehended immediately, and, with a little practice and effort, fully mastered. Leadership Two Words at a Time catalogs the two-word imperatives that are essential for new leader effectiveness, removing complexity and confusion. When your leadership role gets overwhelming—and it will get overwhelming—you’ll be much better off if you simply focus on taking things two words at a time.

Leadership Two Words at a Time will be released on September 27th. It was written for the new leader. As many seasoned leaders can attest, when you move into your first leadership role, nobody hands you a playbook. And that is exactly what I intend this book to be.

What is the most important leadership lesson that you have learned? Sum it up in two words and comment below.