This Above All: Create Safety First 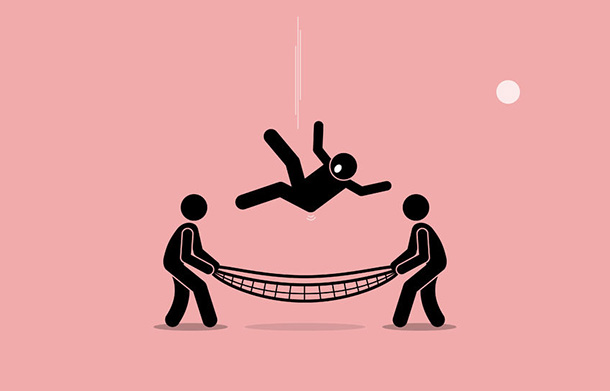 Over the years, a lot of people have inspired me with their courage. But none as much as my fourteen-year-old daughter, Tobina. Bina, as we call her, has cerebral palsy. She is also profoundly deaf. Both challenges are the byproducts of a virulent staph infection she contracted at the hospital just days after she was born.

Americans with disabilities make up the largest minority population in the United States. Some 54 million Americans have a disability of one form or another. And anyone who has been graced by the company of such people knows what a blessing it can be. It can also be heartbreaking. During Bina’s first year, it became clear that she was lagging behind her twin brother, Alex, in significant ways. Alex rolled over. Bina didn’t. Alex crawled. Bina didn’t. Alex responded to our baby talk. Bina didn’t. Alex received adoring smiles from strangers. Bina didn’t.

At first, all I could focus on was Bina’s disabilities, which caused me a lot of anger. I’d think, “Why did this happen to her? Who caused this?” and “Why can’t she do the things her brother can do?” Then, just before she turned two, a friend of mine wisely suggested that I start focusing on Bina’s abilities, not her disabilities. When I heeded my friend’s advice, Bina started progressing much more rapidly. In some strange way, my anger had become a block to Bina’s progress. Looking back, I suspect that I had begun to pigeonhole Bina as “handicapped” and in subtle ways was treating her as such.

One summer a few months before Bina’s fifth birthday, I set up a trampoline in the backyard in a not-so-subtle effort to nudge Alex toward springboard diving. On afternoons when I wasn’t on the road, I’d bounce on the trampoline with Alex and teach him tricks. Bina would be there too, laughing and watching us from the corner of the trampoline bed. At the end of our practice sessions I’d always make time for Bina too, holding her little hands and bouncing up and down.

One day, just to see what would happen, I sat behind Bina, stood her upright, steadied her hips, and let go of her hands. Then my little girl did something she never had done before: She took three full steps. On the hard floor, Bina was never confident enough to do this. Kids with cerebral palsy fall down a lot, and Bina was no different. She had fallen off enough chairs to know that the hard floor wasn’t her friend. So watching Bina take three teetering steps was hugely thrilling. On her fourth step she fell to the mat and giggled as my wife, Shannon, and I cheered wildly.

Recognizing that we were onto something, Shannon and I began to set aside time each day to walk with Bina on the trampoline. Before long, three steps turned to five steps, and five turned into ten. Then we set up a long runner of matted cushion on our back deck, figuring it would help her make the transition from the spongy trampoline surface to the hardwood floor. Drawing on her trampoline successes,
Bina cautiously stepped out on the runner. Soon she was taking more steps on the deck than she was able to on the trampoline. It was all terrifically encouraging and inspiring. Here was our daughter taking her first awkward steps, courageously and persistently . . . at four years old.

Bina eventually graduated to walking on our hardwood floors. Now she even walks on our concrete driveway. Walking unaided has helped her to become more self-reliant and confident. The transformation we’ve witnessed in Bina’s willingness to take the risk of walking has been nothing short of astounding, teaching us the value of creating safety as a way of enabling courageous behavior in our brave little girl.

By setting up our backyard trampoline we had inadvertently stumbled upon a safe way for Bina to do something that she had previously felt was too unsafe to do. Walking, formerly a frightening and potentially injuring experience, now had become fun. Notice that the action we wanted Bina to take (walking) hadn’t changed. What had changed was the consequence (and only temporarily). The spongy trampoline surface was far more forgiving than our hardwood floors. When we surrounded the same action with safer consequences, Bina became much more willing to take a risk.

In the same way that increasing Bina’s safety by reducing the negative consequences encouraged her to take the risk of walking, workers will be much more likely to step up to challenges when there are safety nets in place. People take risks relative to how safe they feel. The more forgiving the consequences, the more likely people are to extend themselves. This does not mean that getting people to be courageous means creating a risk-free environment. Rather, it means supporting their courageous actions with a reasonable amount of safety.

In the workplace, setting up safety nets is essential for promoting courageous behavior amongst your team. What safety nets do you need to install?

If you’d like to learn more about Giant Leap Consulting and how to promote courageous behavior, including our unique workshop, The Right and Wrong of Risk-taking, visit giantleapconsulting.com.