Courage At The Edge Of Fear 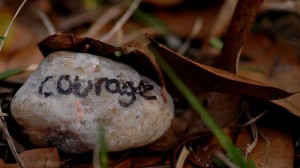 As a volunteer with the Junior League of Asheville, I was able to work with a team of women to provide a job and life skills development class for women who are currently living in a homeless shelter. While the sense of crisis for the women has diminished as they are in a safe and stable temporary home, their anxiety was still high.

Their stories varied greatly. Some were college graduates while others dropped out of high school. Some had once had successful careers or had been in the military or had been stay at home moms. Many had survived abusive relationships. While there backgrounds were different, they were all focused on figuring out how to get back to stable, permanent housing.

After presentations on financial planning and management, resume writing, and interviewing; Laura engaged the women in a conversation about risk taking and courage. In took some of the women a little time, but each of them were able to identify a time they acted courageously. The idea that they could draw on past success when faced with a fearful situation resonated with them.

However, the idea that sparked the most excitement was encouragement. With ease, they each spoke of a grandmother, co-worker, or social worker who cared about them and worked hard to encourage them. As they spoke about the people who had been fillers in their lives, they recalled more examples of personal and professional courage. The group spoke about the opportunity there is to build an encouraging community within their temporary shelter that celebrates success and supports during setbacks.

The hard truth for these women is that a difficult road is before them. The opportunities before them will often come with high risk as they seek to meet their basic needs of safe shelter and consistent access to food. The stakes for them are so high, but freezing in the face of opportunity is even riskier.

These women have plans to go back to school, to get a new job, to gain independence and confidence, and to move out of the shelter. While the details of their life-changing opportunities might be different from yours, the heart at the center of the story is probably not that different.

While building relationships with these women, I was reminded that courage demands something different from each of us.

And the impact we can achieve when we choose to encourage, rather than discourage, can be an impact that reverberates well beyond our knowing.