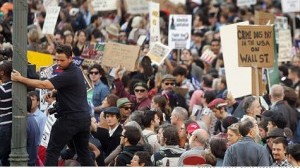 I am an idealist. You have to be if the bulk of your business centers on developing leaders. Leadership development involves helping people close the gap between the leader that they are, and the leader that they want to be. “Leadership” is an aspirational concept that deals in the currency of ideals.

Though an idealist at heart, my idealism has become tempered with pragmatism over the years. Realistic ideals are more effective than unrealistic ones. Which brings me to the Occupy movement. If ever there were an unrealistic idealistic movement, this is it.

While the Occupy protests are colorful and stir the oh-so-American “stick it to the Man” inclinations, its overarching goal is utterly unrealistic. What is that goal? From what I can glean, it is simply “to stop greed.”

Really? Stop greed? That’s it? That’s your reason for squatting in Liberty Square, getting arrested by the hundreds, and storming the Senate building? Stopping greed? What a monumental waste of time.

Greed isn’t some philosophical construct. It’s not a suit that you can wear or discard in a fiddle-de-de kind of way. It’s not some abhorrent Jim Crow law that you can legislate into oblivion. Greed is woven into one’s DNA, in the same way as the other deadly sins. Demanding that people stop being greedy is the same as asking them to stop lusting. Good luck with that. Maybe you can move on to gluttony after you’re done with greed and lust. One thing that we can all agree on is that, from Wall Street to Main Street, Americans could stand some belt-tightening.

Don’t get me wrong, I lean left. I am as disillusioned and exasperated as the next guy. It shocks me beyond belief that there hasn’t been one arrest or indictment as a result of the 2008 economic implosion and subsequent bank bailout. My head boils when I watch the political fanatics on both sides of the aisle turn Washington into a gridlocked nightmare that mostly makes decisions that are in the worst interests of the most people.

But stopping greed isn’t going to happen. It’s just not. And it isn’t the core of the issue anyway. Paraphrasing Cool Hand Luke, what we have here, in the good ol’ U-S-of-A today, is a failure to communicate. Neither side of the aisle talks to each other, reasons with each other, or supports each other. Communication, or lack thereof, is the problem, not greed. It would be more realistic for the Occupy squatters to lock John Boehner, Mitch McConnell, Nancy Pelosi, and Harry Reid in a small room together until they all make friends.

Greed is, quite simply, courage misplaced.

It’s been said that the Occupy movement is a counterbalance to the Tea Party movement. That’s very likely the case. Both movements, at the far edges, are like giant Dali paintings of our surrealist political extremes. On the one hand, you have the government-is-the-enemy, god-fearing (and encroaching), smells-like-racism fanatics. On the other, you have the government-should-save-us, anti-rich, smells-like-hippy anarchists. Wrap those two hands around the country and what have you got? Gridlock, extremism, and wasted ideals.

God knows there must be more useful ways of putting our courage to work.